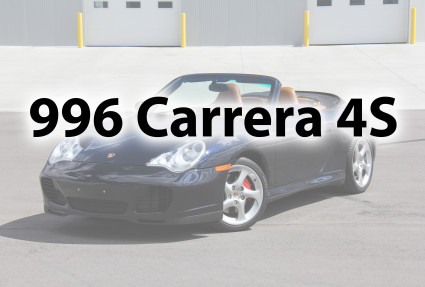 The 996 number is the internal designation number given to the 911’s produced between 1997 and 2006. These 996 models are still to this day, the only generation with the re-modelled 911 headlight design. The 996 Carrera 4S was produced between 2001 and 2005. The Carrera 4S was differentiated from other Carrera models utilizing an all-wheel-drive format, widebody panels and an individual lightbar that stretches across the rear-end.

The Carrera 4S also shares its suspension and brakes with the 996 911 Turbo. At the heart of the 4S is an M96 3.6-litre flat-six engine which is factory rated at 315 hp and 273 ft-lbs of torque. The transmission came in two different configurations, a manual 6-Speed gearbox and a Tiptronic 5-speed automatic transmission.